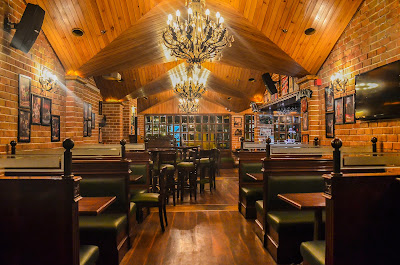 Chatter house located in epicuria which is connected directly to the metro station is one of the most talked about restaurant of the city. These is one more branch located in khan market. We visited here for a friends birthday party and we ordered a lot of food and drinks, still the damage was not much. We had a gala time here. The place is huge and got a very good vibe to it. The ambience is again very serene so that you can chit chat with friends and have fun. The service was impressive and even the staff was efficient.DRINKS: THE BREEZY KIT: this was a vodka based drink (house infused stolichnaya with anise) with watermelon and cinnamon. This was ordered by a friend and she really liked it. But personally I didn't it because i am not a cinnamon fan and it had a very prominent flavour of cinnamon in it. THE MANGO MISTAKE: I ordered this stolichnaya based cocktail as the combination seemed interesting. The drink tasted likewise. I loved this drink it gave me a good buzz too. RECOMMENDED 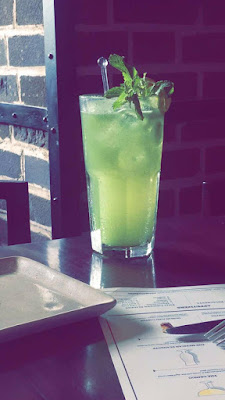 LONG ISLAND ICED COFFEE: yummmy. Mixture of five spirits with cold brew coffee and super cold. Yes we all loved it. All the coffee lovers are gonna love this huge glass of coffee cocktail.YOUR FIRST WHISKEY: so the names of the cocktails are so cool. This was jim bean whiskey based cocktail with orange and cinnamon. I didn't try it but well the whiskey lovers really liked this one. MONKEY VINEYARD: well a wine lover ordered this over sangria because she wanted to try something new but this was not a very palatable drink so we had to leave this and ordered something else. It's best to avoid this one.THE YORK MINT HURRICANE: it was a tangy, minty, whiskey based drink combined with green tea. It is one of my favourites there now. RECOMMENDED DUBLIN ICED COFFEE: this was a very creamy beer based drink and well according to me it had a very strong and tart flavour to it. It can be a little strong for some people. VIRGIN MOJITO: served in a very big mason jar this mojito had all the right flavours in right proportion. It was perfect. RECOMMENDED.ORANGE SUNRISE: this drink looked so pretty as it had ombré texture to it. It was a mixture of orange juice, vanilla ice cream and grenadine. It was a very refreshing and delectable drink. HIGHLY RECOMMENDED.VIRGIN COLADA: this drink contained pineapple juice, coconut milk and vanilla ice cream. It was good but a little sweeter for my taste buds. Can be skipped. Because there are so many better options to choose from. 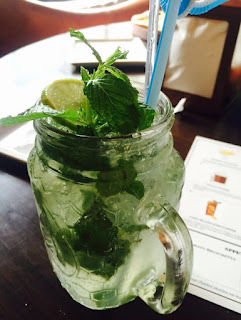 STARTERS:DAHI KE KABAB: well the texture itself was super inviting and they were served with curd merinated onions and green chutney. To start with, these kababs were the most appetising thing i've ever seen. Hats of to the chef for creating such a bliss, i love these dahi ke kababs. You got to order them HIGHLY HIGHLY RECOMMENDED.ONION RINGS: though they were a little oily but they were super crunchy and flavoursome. I don't like onion rings at every place but they literally nailed it. RECOMMENDED.BAKED NACHOS: they were on point. Overload with cheese and veggies and salsa and sour cream. Oh my god it was such an amazing burst of flavours in my mouth with all that deliciousness of cheese. Sweet sour cheesy salty chilli crunchy. Idk everything together made such a tasty appetiser. It was exotic veggies and the nachos themselves had a very good flavour. HIGHLY RECOMMENDED. We literally ordered 2 more after the first one. BRUSCHETTA: had good flavour of garlic and was topped with cherry tomatoes and basil. I liked this one a lot. 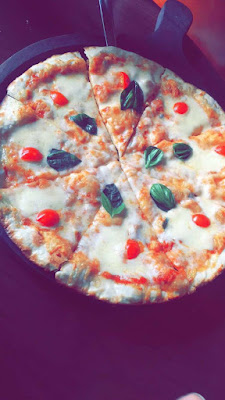 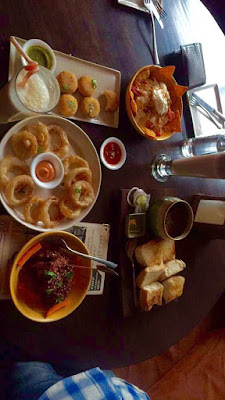 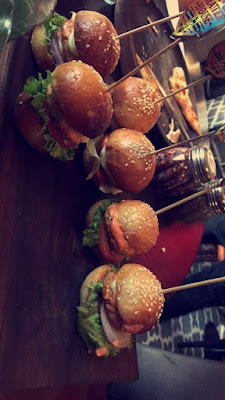 VEG PIZZA:had VEGETARIAN PIZZA AND A MARGARITA. Vegetarian one tasted better than the margarita. Pizza was filling and tasted good.NON VEG PIZZA: it tasted amazing. A must try. Had generous amount of chicken and cheese.KEEMA PAO: wallah. Keema was so astounding. And the paos were fresh and soft. Spices were so ideal that We loved it. HIGHLY RECOMMENDED.BLUE CHEESE NAAN AND DAL MAKHNI SHOTS: so this is one of the signature dishes they serve. We all totally drooled just by the smell that came from this dish. Plus the Presentation was enchanting. The plate has 3 baby naan which had blue cheese and were topped with pineapple chutney served with three shots of dal makhni. So not everyone will like this dish because indian flavours do not have any flavour as strong as blue cheese, and it will require a acquired palate to appreciate this dish. I really love this dish as i love cheese and wine. But a lot of my friends hated it. So think twice before ordering it. Ordering Dal makhni and naan separately might be a better option it you dont like blue cheese. BBQ CHICKEN: not that great. Had a lot of scope of improvement. 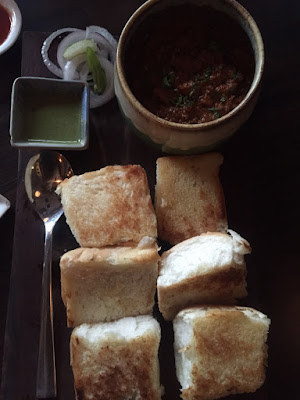 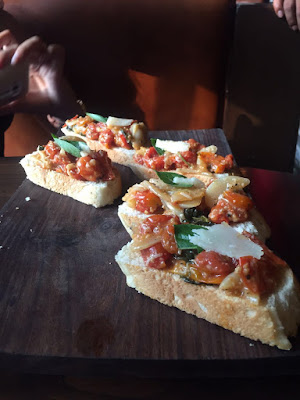 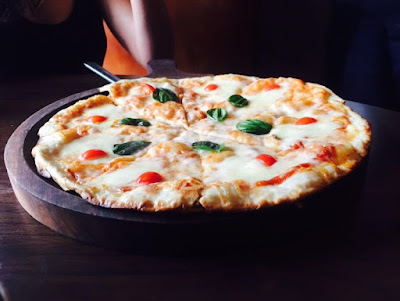 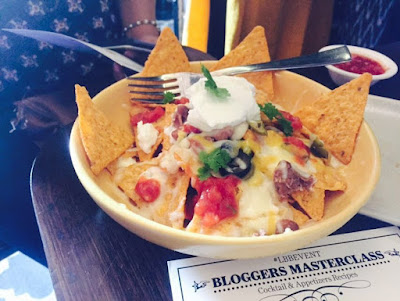 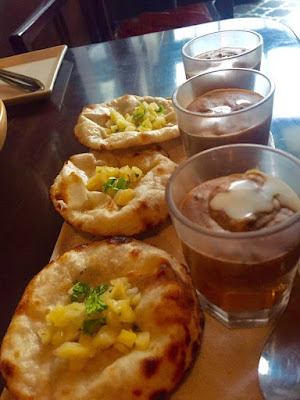 DESSERTS:CHEESE CAKE::it was so drool worthy. They served it with mango puree on the top. People who don't even like cheese cakes will love it. It was different in a good way. RECOMMENDED MOLTEN CHOCOLATE CAKE: served with the ice cream of your choice. We asked it with vanilla ice cream. The chocolate used was of good quality, it tasted heavenly with a huge pool of molten chocolate inside it. GOOEY CHOCOLATE CAKE WITH COFFEE ICE CREAM: this gooey cake was everything you want at the end of your meal. It was remarkably gooey and chocolatey and had a very gentle flavour of coffee in the end. The combination of this cake with coffee icecream was outstanding. HIGHLY RECOMMENDED. 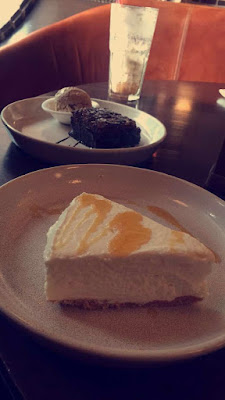 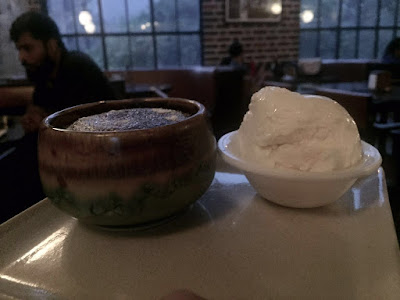 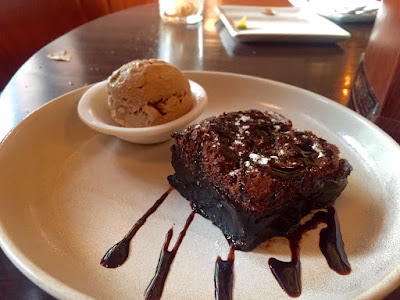