The ambience of the place is very colorful and funky. It has car bumpers sticking out as soon as you enter and a huge picture showcasing the busy Mumbai life. There are pincodes written behind the chairs like on bus stops, Queens Road, fort street, banganga road etc. They have lovely wall graphics showing Mumbai’s life. Also they have cola bottles in some places as decoration. They serve water in Maggie  ketchup bottles, the big bottles that Maggie has.
Walls totally reminded us of streets of Mumbai and the flooring had zebra crossing over it.
Even though we visited the place for dinner on a weekday, it was quite full with people of all age groups present there. After all, who doesn’t like street food. 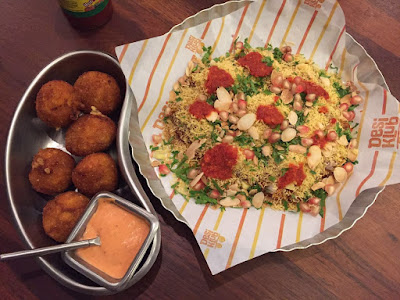 As soon as we saw the menu to order drinks, we noticed our favorite drink from childhood, Energee milkshakes. We ordered this tasty bubblegum flavored energee milkshake and along with that we ordered Pineapple ganna juice, which is fresh juice made with sugarcane and pineapple juice. It was very refreshing and tasty. I would say the local ganna juice with a twist of pineapple. We also ordered a pista kesari badam khullad, which was a cold milk based drink and was served in a desi khullad. Tasty! 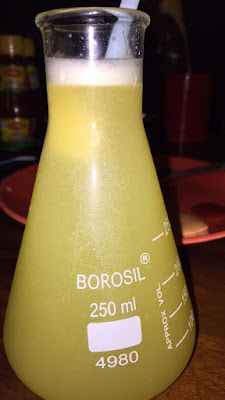 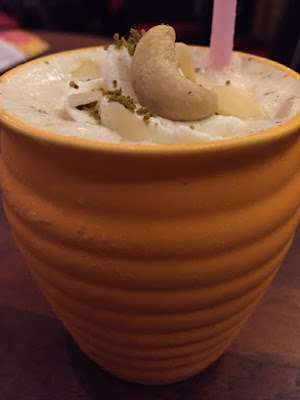 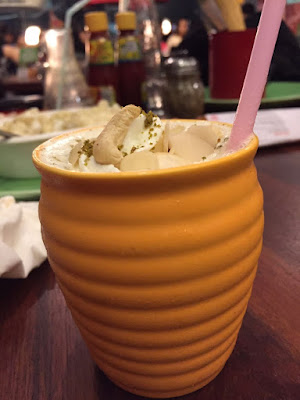 We had sev-puri which was normal sev-puri which you get everywhere, but definitely was super tasty. We ordered their papad-bhel, which is bhel made with khichiya papad. The bhel was presented very well, in the shape of a mountain, and then you break it and taste the appetizing papad bhel. It is not a must have, but it isn’t bad either.

We also had their cheese garlic bread, which is garlic bread, which is served on brun-pao and served with a dip. Garlic bread was fair and decent.
Then we ordered their le le nachos. These are nachos with a twist of nachos being replaced with Lays chips. It comes in a bowl with lays laid over and cheesy sauce served in a cutting-chai cup kept in between. The waiter poured the cheese sauce all over the lays. And that cheese sauce was a total delight. It was so cheese and tasty, it would melt in your mouth, and tasted perfect with those American flavored lays. We were drooling over this!
We also tried their Cheese Corn masala balls, which were small balls filled with corn and cheesy filling. A good one! 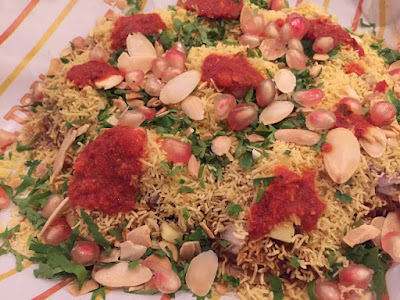 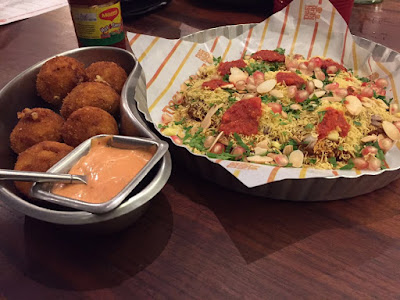 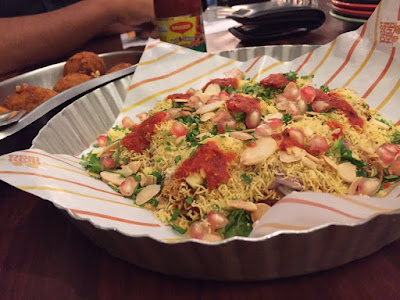 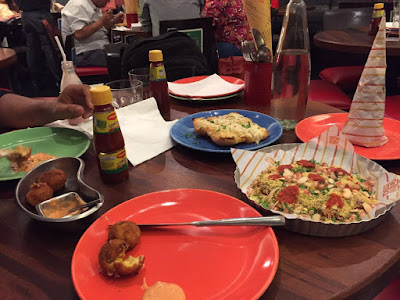 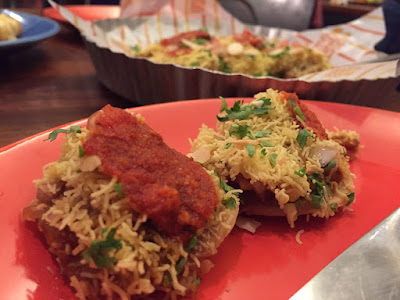 They have introduced three new pizzas, or lets say peehzas as they call it, to their menu - Hawaiin Peezha, Indian Focaccia and Paneer Tikka peezha.
We ordered their paneer tikka peezha, which is pizza topped with spiced cottage cheese, onions, cheese and sauce. The pizza was as good as a home-made pizza. Nothing extraordinary about it. But yes, the paneer pieces were extremely soft and tasted good with the sauce.

Then we tried their cheesy cheez macaroni, which is macaroni tossed in Indian Cheese sauce. The macaroni was cheesy and tasty, and definitely reminded me of the macaroni my mom used to cook for me as a child. With a hint of garlic in the sauce, it is quite palatable. 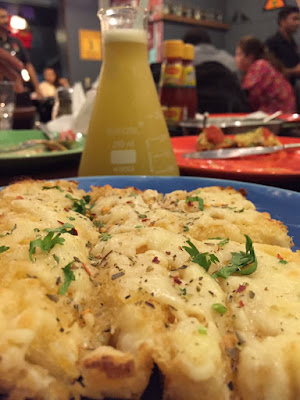 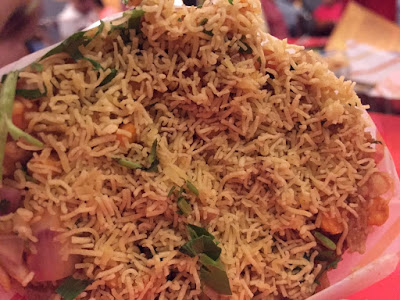 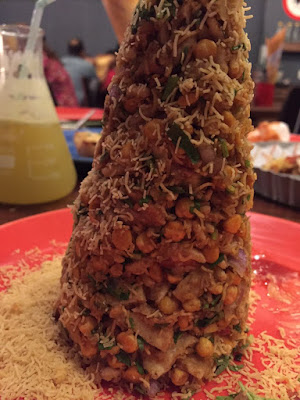 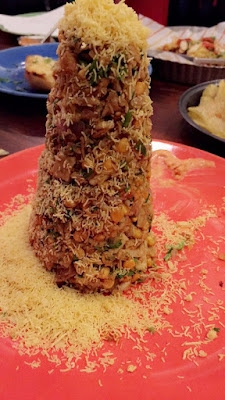 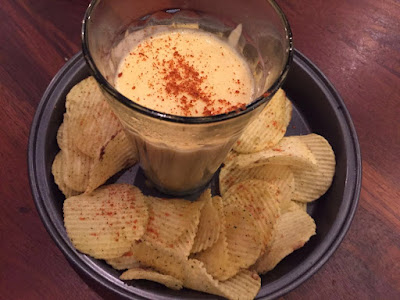 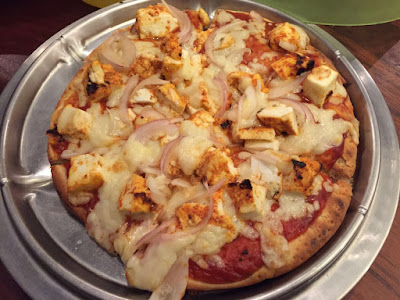 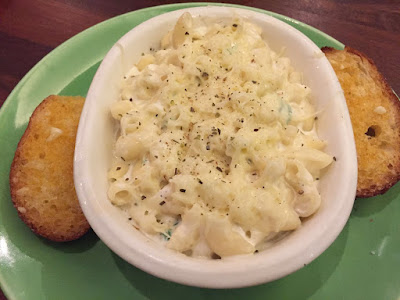 They also have two new pulaos in their menu, Subzi mandi and Delhi Belly pulao. We tried their Delhi Belly pulao, which was tava pulao with vegetable patty topped with cheese sauce. Since it was served like a sizzler, the rice had burnt taste in them and we didn’t really like the rice with the cheese sauce, but the patties which was served on top were absolutely delicious. It comes with two patties, we didn’t eat the rice at all, but finished both the patties. It was scrumptious with potatoes and vegetables mashed in it. 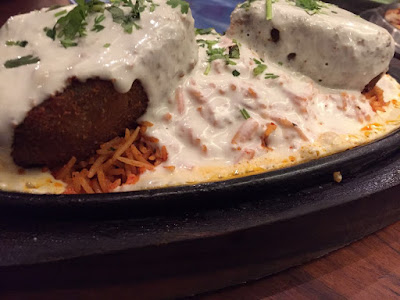 They don’t have anything new in desserts, but we ordered from their old menu, Ina Mina Dika and 5-ishtaar Sizzling brownie. We enjoyed both of them. 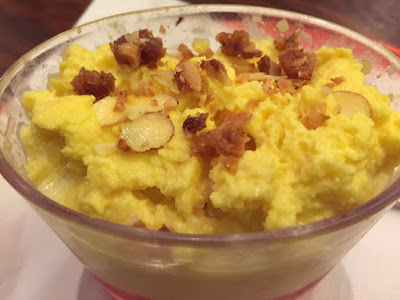 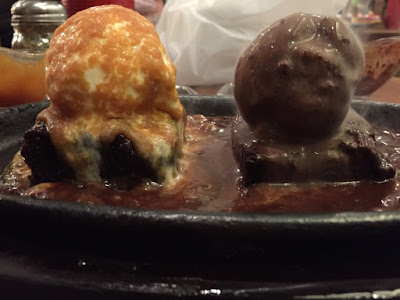 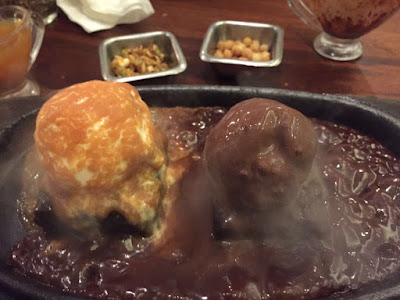 So if you are craving some really good street food, but don’t actually want to go on the streets, you should be heading to DesiKlub and savor some totally mouthwatering street food with a twist in their lovely Mumbai-street like ambience. I am sure you will not be disappointed.