GOT FARZIFIED at FARZI, Cp

Cp is filled with a number of watering holes and this swanky eatery simply adds on sparkle to this place.
Farzi is a phenomenon that can only be felt and experienced , my experience was spectacular !! A delectable showcase of molecular gastronomy.

As i entered the place i was taken aback by the look and feel of place , which is eye pleasing. What a classy ambience! Everything from nicely done tables , a stage for live performances to the lively bar , everything was perfect.

Coming to the service, nicely dressed staff was very welcoming and courteous and  there was not a single time when the waiters weren't around or missed a thing we asked them to get. The best part was every waiter had the knowledge about the dishes , which was very impressive!

In drinks we had-

Litchi panna desire which had lil flavour of litchi and was sweet in taste but is perfect drink for summers.

Farzi OK- signature mocktail , an orangy mocktail presented in a cute jar which is ordinary these days was blended to perfection.

Chai pani- not an ordinary chai and not so strong but innovative cocktail, mixed with cinnamon , one of the best drinks!

And how could i forget about the Bantas , this wasn't ordinary at all , cocktail flavoured bantas was one heck of an innovation.  we had two of them kala jamun and aam panna . 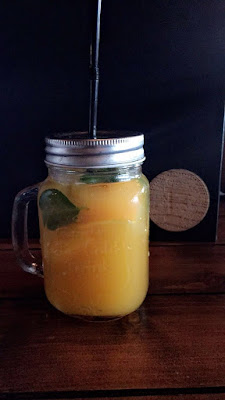 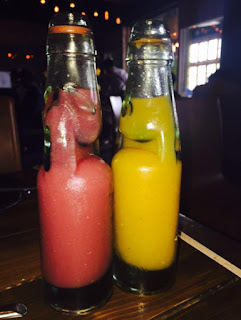 The food was in sync with fusion of indian food and every item on the menu had some twist.

We started off with the unique shots - mishti doi shots , palate cleanser which was really something new and delicious , it is a complimentary dish on every table.

Coming to the starters , the chef served us with the following dishes -
Dal chawal arancini- signature dish , trust me dal chawal never tasted so good , the filling was of rice and daal with cheese and coating was of papad served on the bed of tomato pury .

Chilli potato samosas - fusion at its best , honey chilli potato wrapped in a cute lil samosas with right amount of spices garnished with sesameseeds were delicious  in taste.

Delhibelly- sweet , sour and chatpata flavour is the best pork appetizer i've ever had, meat lovers must have it. 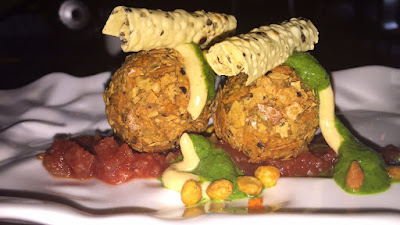 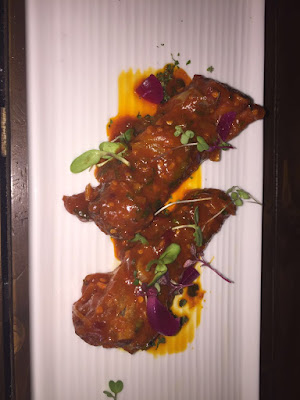 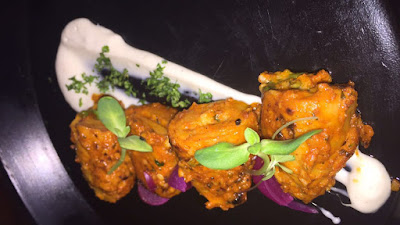 Mini raj kachori- rollercoaster on plate, these yummy mini raj kachoris were served with crispy okra salad , with nimbu mirch air on top was so good that you'll end up ordering it again.

Chilli pork- thin batter and right amount of spices used makes it one of the best dishes at farzi.

Delicious cooked fried prawns tempura ,a molecular heaven , deep fried jumbo prawns topped with tamarind foam was so palatable that it was surely a yummy treat for our stomach.

Cashew idlis , a lite snack was decent in taste  to have in starters.

Another unique twist to south indian dish paddu which is basically made up rice balls served on the base of 2 sauces which was fine in taste .

Soya chaap , a wonder dish which was soft , moist and flavourful. 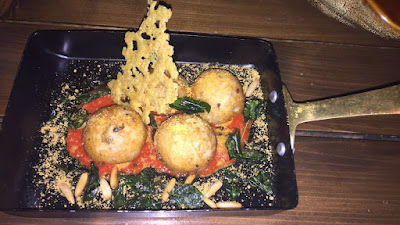 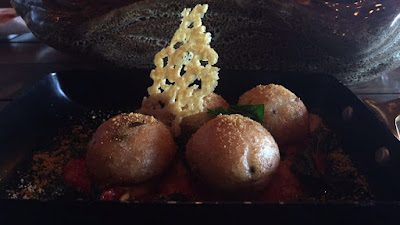 After we completed with our starters , we were served with hajmola candy to help aid digestion in a branched structure which was again a complimentary thing served to every customers.

We were so overstuffed with the starters that we end up ordering only 2 dishes, dal makhni with garlic naan , though dal makhni had great flavours in it but it was not upto the expectation but on the other hand mutton kuzhambu  with flaky appams , a drooling combination was  something to linger for long. 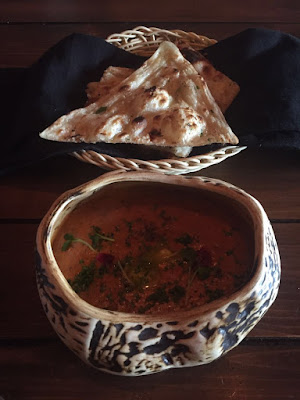 In desserts we had their all famous parle G cheesecake and milky way dessert.

Parle G cheesecake , though not a big fan of cheesecake but this dessert was not to be missed , one of the best innovative things over here , it's all about rabri, cheesecake and parle G biscuit.

This wasn't all , they surprised us with a sweet end to our meal by giving us paan candy floss! Soo tasty and unique. 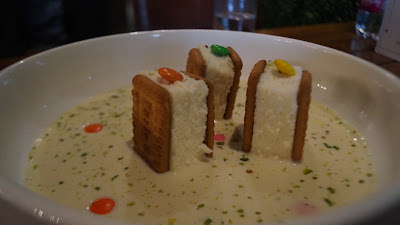 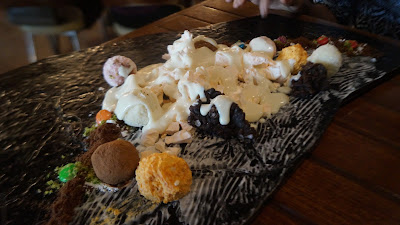 The toys used in serving the food were noteworthy, chicken served in a small truck, mac n cheese pakodas being served in small rickshaw sort of thing, main course dishes in london phonebooth thing and bill in an adorable typewriter.
All we have to say is that we're totally FARZIFIED with quiry yet chique with modern bistro Farzi cafe , serving scrumptious fusion food and we're definitely going back again, kudos to the owner and the whole team of farzi!